The HISTORY OF ANOTHER WAY 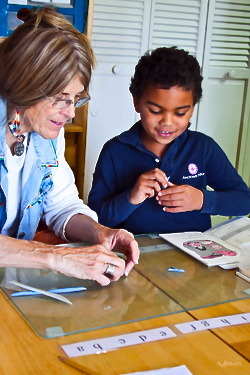 The vision for Living Matrix Education, Inc. dba Another Way manifested in 1978 while attending graduate school at Saint Mary's College in Moraga, California.

From early childhood, I was drawn to reading about Native Americans.  Over the years, this passion grew as my studies and my respect for Native peoples broadened and deepened.  I discovered that the philosophy "We are all Related" grew out of thousands
of years of their own extraordinary history.

Out of the rise and fall of their own great civilizations grew the Native American understanding of the interrelatedness of all life and the need to live in harmony with the earth and all her life forms.  This spiritual ground was inculcated into the lives of every Native American Nation prior to European Colonization.

Enrolled at Saint Mary's College in the Master's Degree program in Early Childhood Education and American Montessori Society (AMS) Certification in 1978, I was introduced to the beauty and the power of Montessori Method.  Because of my “old style ranch” upbringing, I realized that what was missing for children was a direct connection to the wild, natural world.

During my years of teaching in urban schools during the 1970s and my Montessori internship at Saint Mary's, I observed the growing isolation of children from the earth and from themselves.  Direct interaction with the natural environment was reduced to occasional field trips, artfully arranged flowers in vases, potted plants, and classroom pets in cages or terrariums.

In 1978, I was under the mentorship of my beloved professor, the late Rosemary Peterson Ph.D, who was Director of the Master's Degree Program for the American Montessori Society (AMS) and Early Childhood Education (ECE) Specialist Credential at Saint Mary's College.  At the end of my first year, I began working on my Master's Thesis which was designed to use skiing as a vehicle to study how children learn.

The model for an integrated learning environment and curriculum that would build relationships and connect children to Nature was inspired by my passion for Native American and European History, my ranch up bringing from 1948-1960, my love of horses and skiing, my Montessori education, and a need to find a way that would help awaken the mind to co-creation in peace, in kindness, and, in harmony with Life.

Montessori clearly stated that Nature has provided inspiration for all the arts, sciences and technology; that is, all the gifts of civilization. Interaction with Nature is the foundation that fosters the development of respect for all life, problem solving abilities, effective communication, and the development of compassionate intelligence.

In addition to my study of the Montessori Method, I studied the works of Jean Piaget, Newell Kephart, Rudolph Steiner, Howard Gardner, Edith Cobb, Lawrence Kohlberg, Erik Erikson, Abraham Maslow, Wilhelm Reich, Gregory Bateson, Carl Jung, Rabindranath Tagore, and many other innovative educators and psychologists.  I began integrating core concepts across disciplines to create a learning environment and curriculum that would more fully meet the developmental needs of the child and their need to know the "why" of things.

During this process, I came to understand the critical role of Master Teachers who were committed to a vision that recognized the "Kinship of all Life."   Children, by biological design, duplicate the values, attitudes and behaviors of the significant adults in their lives.  It is vital that teachers who work with children have core knowledge in their chosen fields of expertise, and a profound respect for all life.  Teachers must "get" and be committed to a vision helps awaken the child's mind to the spiritual connection of all life - the all inclusive Oneness.

As a ski instructor and a Montessori Directress, I soon came to see skiing as a "total learning experience" and a wonderful vehicle for studying how children learn.  Working with Dr. Garrick, Director of the Saint Frances Hospital's Sports Medicine Department, and with Dr. Rarrick, the Director of the Motor Development Lab at UC Berkeley, I was told that the program was "Blue Sky."  They told me that they had never seen an instruction model that integrated disciplines and concepts in this manner - it was a first of its kind.  They felt that its potential for significant research on how children learn was tremendous.  They supported me in my work on every level.

The first step in the formation of the educational model of Another Way was the development of Panda Skee(tm), a pilot program designed to present my Master's Thesis using children's ski instruction, and implement it at Dodge Ridge, a ski resort in the Sierras.

The second step in the formation of what would become Another Way was the presentation of the Panda Skee(tm), the first developmental children's ski instruction program to the ski industry.  Formally adopted at Squaw Valley in 1980, the program was then brought to Utah in 1982 by Weber State University's Physical Education Department.  Upon moving to Utah in 1984, the ski instructional model was systematically introduced to all the major resorts in the Wasatch.

In 1988,  Child-Centered Skiing: The American Teaching System for Children  was published by the Professional Ski Instructors of America (PSIA).  The concepts presented in the text can easily be applied to instruction in any course of study.  The Panda Skee(tm) model presented in Child-Centered Skiing inspired many of the ski instructional environments, children's centers and pre-ski programs currently in place in ski resorts - Nationally and Internationally.

My interest in the old West and American Indian people expanded as I explored the realms of mountain men and the ceremonies and traditions of tribal peoples on reservations in Utah, the Dakotas, Wyoming, Montana and Colorado.  In Utah, I met Dick James, Historian and Mountain Man.  Dick became a dear colleague and supporter of my work to expand the model in Child-Centered Skiing into a Nature-based educational model within a community center.  We incorporated the ancient knowledge and skills of the Native Peoples, the Colonials and the Mountain Men of the Fur Trade Era into the model whereby children learned history from hands-on participation and stories told in the old way.

Dick James introduced me to Gladys and Reg Laubin who were living in a log cabin outside of Jackson Hole,Wyoming.  Reg and Gladys were Elders who had spent their lives recording the traditions, ceremonies, dances and music of the last of the pre-reservation Plains Indian People.  The authoritative books written by Reg and Gladys Indian Dances of North America and The Indian Tipi were used as the foundation for recreating the Native Way of life in movies such as Little Big Man, Dances with Wolves, Into the West, and many more.

Over the years, Gladys and Reg came to believe in my dream of an educational program that connected children to their roots in the earth; a community based education that would help students (children and adults) "see the big picture" and move beyond societal limitations with respect and kindness.

The Laubins encouraged me in the integration of life affirming concepts within a Montessori foundation and incorporating the Native Peoples' land-based learning that respects all life.  They recognized that the program would provide an educational environment and curriculum that could awaken the mind and meet the child's need for connection and purpose.  They also saw the program as a way to present the pride, power and potential influence of ancient Native America in an education for all peoples.

Reg and Gladys became my mentors.  As I worked with Gladys and Reg, I was introduced to Ferial Deer Skye, a Native American who also became a mentor. Through Ferial, I met Clarence Skye, who was the Executive Director of the United Sioux Tribes.  Both Ferial and Clarence honored the Laubin's work in helping preserve the knowledge of the Plains Indian tribes.  The Skye's knowledge and wisdom also helped guide me in my work.

Reg Laubin shared a belief held by the Old Ones

"When decisions are made from the Heart and the people are guided by Spirit,
there is always Another Way."

Reg told me to call the educational model Another Way.  He felt that what was being presented embodied the ancient, pre-reservation way Native Peoples provided nurturing, connection, and community in support of all life for their children.  The educational model based on the material presented in Child-Centered Skiing:  The American Teaching System for Children was incorporated in 1991 as Another Way for American Indian Education.

Wenonah Deer Skye, the daughter of Clarence and Ferial became a colleague in the early formative years.  From 1996 through 1998, Wenonah and Chris Donato, a dear friend and colleague worked tirelessly with me helping to develop a business plan for the educational model .

Six months prior to her passing, Gladys called and told me that my dream was a good one.  She encouraged me to follow it, the way she and Reg had followed their dream.  And so, I have.

It is my hope that Sitting Bull's plea, "Let us put our minds together and see what life we can create for our children" will be recognized, appreciated, and followed by all us - for our own sake as adults, and for the sake of the children who emulate us.

Another Way works for all children regardless of race or ethnic origins because it honors the natural learning process of the child and is grounded in respect for, and love of Nature, and its Source.  All patterns connect - all life is one - all are brothers without exception.

Currently, Living Matrix Education, Inc. dba Another Way, a private, nonprofit 501 (C) 3 educational organization incorporated in 2004 presents a community-based learning environment and methodology designed to respectfully meet the needs of the developing child in the historic Synderville Basin; once a gathering place for Native Peoples, Mountain Men, and Pioneers.  The roots of Another Way are firmly grounded in Native America's respect for, and love of the earth.
​
"We are all Related" 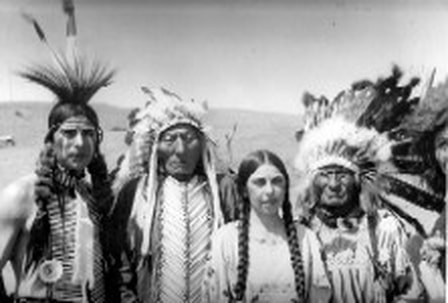 Reg and Gladys Laubin with Chief White Bull and Chief One Bull, Sitting Bull's fighting nephews.
These two Chiefs led the charge against Reno at the Little Big Horn.

Reg and Gladys Laubin in Wyoming
I am going to venture that the man who sat on the ground in his tipi meditating on life and
its meaning, accepting the kinship of all creatures, and acknowledging unity with the universe of things was infusing into his being the true meaning of civilization.
- Luther Standing Bear (Oglala Sioux 1868-1939)